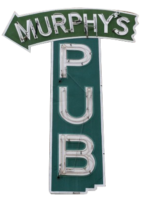 Our Vision
The partners at Slainte LLC got together in July of 2010 with the single mission of restoring and revitalizing Murphy’s, an iconic public house (pub) that enjoyed nearly eight decades as a staple in the downtown Rapid City bar scene. In order to ensure that Murphy’s is successful for decades to come our goal is simple; create a comfortable and inviting pub atmosphere that honors the rich history of the building, as well as provide a dynamic environment that has something for everyone; from the lawyers & doctors, to the electricians & plumbers that make the melting pot that makes Murphy’s such a success. In the days of social media, and cell phones we strive to be the place where you don’t even need to call your friends to meet up because you know they will already be there.
How did we get our name Slainte?
Slainte (pronounced zlan-jé) is commonly used as a drinking toast in Ireland, Scotland, and The Isle of Man, and is literally translated “to good health.”
What is a public house?
A Public House, or Pub as it’s more commonly referred to today, began in Ireland in order to provide an alternative for the working class to the Private Houses, a place frequented by the affluent in society that required membership. The pub atmosphere was simple—hard bench seats, and bare board walls and floors that were sometimes covered with sawdust to absorb the spitting and spillages. They provided a central point for the local community to gather and listen to Irish music, exchange stories, and indeed gossip over a cheap beer. Not only did the local pub offer ales, it also offered essentials such as food and hardware.

In more recent times, the Irish Pub has spread throughout the world, and developed into a resemblance of what we have today. Although banned in the early 19th Century by British legislation, pubs naturally began to flourish as a form of opposition. In Ireland there are over 10,500 public houses and 90 percent of all beer sold in Ireland today is sold in pubs.